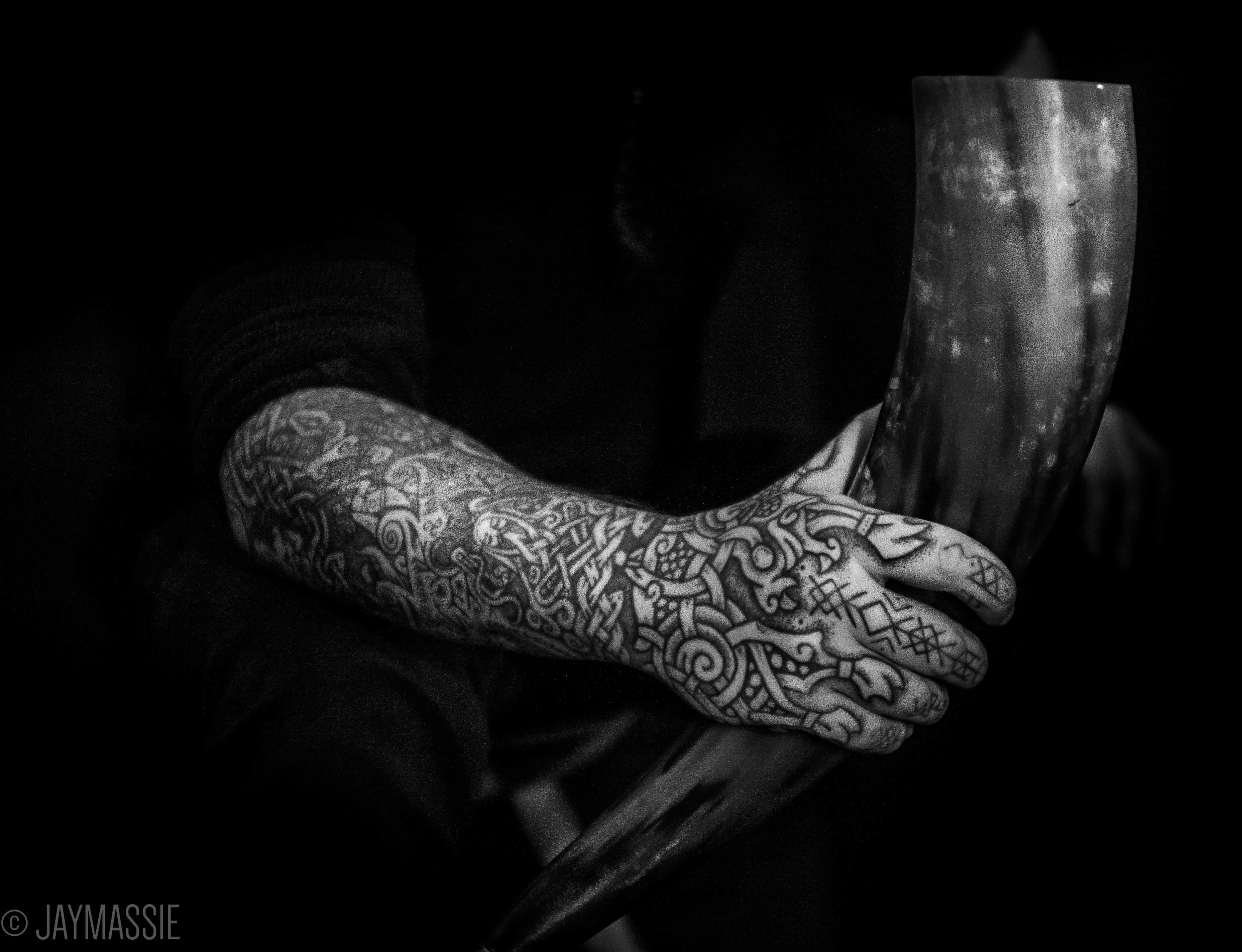 There is a story behind every tattoo that’s ever been put on skin. Maybe the story was that it was a deeply spiritual well planned out experience. Maybe it was a drunken tattoo in Ibiza. Maybe it’s three stars to symbolise the wearers three children, maybe it’s just because it seemed to be in fashion. Maybe all of these descriptions are about a single tattoo on an 80 year old man. 😀

I’m going to be narcissistic and discuss some of the reasons and meanings behind my tattoos first. My first tattoo is of a tribal looking sun on my upper left arm at Tribal Child in Llandudno when I was 17 (two weeks before I turned 18… I lied about my age). I made the design myself when I was 14 and waited for years to have it done. It was to symbolise my love of the sun and how it brings life as we know it to everything on earth. Also my immature plan was to be really cheesy and have a theme of life on my left arm, as I’m left handed and draw mostly with my left…and a death theme on my right arm. That idea went out the window after a few years after I realised I wanted a complete ancient northern art theme with all of my tattoos. I was greatly inspired to be tattooed by my big brother Pete and sister Shell who had tattoos when I was young. For whatever reason I used to believe it was neccesery to have lot of separate styles and small flash like designs, as opposed to the large themed tattoos I practice in working with today. That’s what you get from growing up in a small seaside town in North Wales in the 90s. I don’t regret my first tattoos though and I’ve not covered them, they still mean to me now that they meant to me then and I wear them with pride alongside my most recent tattoos.

Now on my right forearm I have four stories from the ancient welsh mythology known as The Mabinogion. A lot of the tales reference the places that I grew up, and my Nain (grandmother) used to tell me some ion the tales when I was young. I like to share the stories with friends and new people I meet, so they serve as a picture book of a sort as I go through the stories. I’ve made a video for you here of the tale of Taliesin’s creation. 🙂

On my hand I have have a Jelling style bear to represent the mountain I grew up on. In Welsh it’s name is Y Gogarth, which means the bear in the cave in the North. But it was known by seafarers as The Great Orme. This comes from the Old Norse work for Wyrm, meaning serpent, as we would know it now. So I crossed the two ideas together and ended up with this. The runes on my fingers are composed in The Elder Futhark, as it’s one of the runic writing systems that works best for writing in modern English and Welsh. I combined the runes together to create riddles from them encompassing all the names and meaning I wanted to have in the bindrunes to represent my family, heritage and beliefs.

Some of you that read this will be thinking that that is quite a few separate ideas I’ve joined together, and without a doubt it is. But it’s the 21st century and I respect all of the elements I’ve used in these runes, and that is also a part of the story of my tattoos.

If you’ve seen any of my past work you will know I’ve included a lot of the ancient Scandinavian stories in my tattoos. Again, I work with my clients on what they want their tattoo to mean and represent, so I work within those confines. People often tell me they want the story of a god overcoming their enemies, Thor for instance and Jormangandr the world serpent, as they relate to the struggles they’ve had to deal with and overcome in their lives.

On my wrist I have Myrthin Wyllt, otherwise known as Merlin. In the original tales of the Bard, his lord is killed in battle by a Saxon warlord, so Melin flees into the forest and looses his mind. He becomes a hermit and speaks to trees and animals and regains his peace and mind, or at least some of it. So, here I combined the idea of Myrthin Wyllt and the Celtic God Cernunnos to mark the point in my life where I too felt like I  found my peace and direction after falling into chaos, litertally. As soon as I finished the tattoo I felt like the curse of the chaos was lifted, and it acted as a permanent reminder of that.

Not all tattoos have to have great meaning to them and not all of them have to be so symbolic in this way to carry the same weight to the wearer, but this is one approach. Either way, the meaning that does go into them should be carefully assessed and well thought out if its going to stand the test of time. As I previously mentioned about my first tattoo ideas, my right arm was previously reserved for a death theme. This only got as far as a Grim Reaper on my shoulder that I am getting covered over with a more meaningful tattoo. I hope you don’t make the same mistakes as I did. 😀 If you have ideas for tattoos, think of them for at least a few months. If the passion for the idea is that strong, it will still be there in the future… and never get tattooed because you think its fashionable. I won’t elaborate on this any further than stating that fashions change!

I don’t think it would be fair to say that we have forgotten how to tell stories in the age of technology, but we have certainly lost a lot of the tradition and ability to tell stories how our ancestors would have a hundred years ago and back. If you have read this far into my rant then I assume you too must feel partly that there its something to be said for relearning this primal ability and enjoying it for connections to the past it provides.

We are all story tellers in our own way; when we talk to our friends and family, its pretty much what we are all doing. We live our own stories, and we all do our best to make them flow in the direction we want them to…even if we know the Norns, the three sisters of fate, past, present and future have already woven the tapestry that is our lives. 😉

Wow, Sean, many thanks for sharing this with us! It was a pleasure to see your video on the story behind and read your blogpost. I fully agree on the meaning of storytelling for our ancestors and when we had a storyteller at one of our women circles we could experience the healing powers of a story and what it was able to transport to every woman attending.
Thank you so much for sharing and I’m looking forward for more posts and videos from you!

Thanks for these tales Sean. Great insight into the deeper meaning of your tatoos. I tried making inquiries about a tattoo with you, but you were so busy it was impossible. With the new website and this blog, I can’t imagine that things will calm down much :-(… It is great to approach your tattooing in this way. It gives a real significance to the tattoo, not only as an original piece of artwork , but also as something making connections with ancestral beliefs, heritage and practices. I feel it’s important to be tattooed by someone who has a deep understanding and feel for what you’re having tattoed and I really don’t see the point in a tattoo just for the visual aspect without further thought. Also agree on the story vs technology front, though there is a lot of hope. We only seem to have lost the art of telling stories, not listening to them. I recently decided it would be good to tell some stories around the fire in the summer. I chuntered a story to myself and the other night took a wee dram sat, next to the fire watching the sun go down and told the tale of Canall Crog Buidhe to my wife and daughters ( who are already 16 and 18 so not easy prey …). They were mesmerised (and it lasted more than 30 minutes!) declared it was much better than TV and asked for a new one the following night. We just have to make the effort to keep stories alive – people love listening to them if we take the time to learn them well enough. Keep up the blog – I’m really enjoying the reads and the celtic / norse inspirations behind your work. And of course keep the amazing tattos coming 😀

Really pleased tio see your website is now live and even more to read your blog post as it’s great to read about the depth of thought and connection that you put into your art and craft. I hope you’ll post more as this is wonderful, huge thanks!

Wonderful post, Sean! So great that you are sharing your stories behind the work, and your personal journey to the place you are at now. So proud of you, my brother.

Hey, I think your site might be having browser compatibility issues.
When I look at your blog in Chrome, it looks fine but when opening in Internet Explorer, it has
some overlapping. I just wanted to give you a quick heads up!
Other then that, fantastic blog!

Hi, Thanks for the heads up – hopefully the latest update has fixed it for you 🙂